The St. Baldrick’s Foundation partnership with Fadó Irish Pubs is one of the things I am most proud of about my employer. St Baldrick’s is a non-profit organization that raises money and awareness to fight childhood cancer. Fadó has partnered with the organization since 2002 and (as of THIS WEEK) has raised more than $7 million. That’s a really big deal …but, not for the reasons you may think. Yes, that’s a lot of money and the cause is certainly worthy, but from where I sit, it’s the HOW that blows me away.

The fundraising events take place in March prior to the big St. Patrick’s Day festivities, but the preparation begins months in advance. It all starts this time of year with recruiting “shavees”; signing up hundreds of brave volunteers to go under the clippers and then seek donations from their friends, neighbors and co-workers. On the big day, shavees at our events gather at the pub with family and friends and, with the help from local volunteers, they shave their heads bald. It’s a rather unique way to raise money for such a serious cause and the atmosphere during the event is super special & festive! These are family-oriented events and kids of ALL ages are excited to come out and do their bit for the fight against kids’ cancer

So that brings us to right now. Hitting the 7 million mark this week was in part due to the collective fundraising efforts we saw last March where 1,058 shavees across nine Fadó Pubs raised $1,007,837, a record within the Foundation for any participating restaurant or pub chain.  Those numbers truly are impressive but what makes fundraising for St. Baldrick’s so meaningful are the individuals whose lives are changed so profoundly. There are so many personal, inspiring stories year over year. Here are a few stand-outs from across the country from 2014:

Perhaps a top 3 earner in the U.S. for all Baldrick’s fundraisers, one great story involved 4 nurses called Team Tuesday. In honor of the loss of the team captain’s daughter, Tuesday Whitt, to neuroblastoma when she was 2 years old, they encouraged folks to dress up in super hero and princess costumes, and to set up carnival games, caricature drawings, face painting, and raffle prizes. The entire event was next level and Team Tuesday was the top team on the day, raising over $64,000 of the $427,206.68 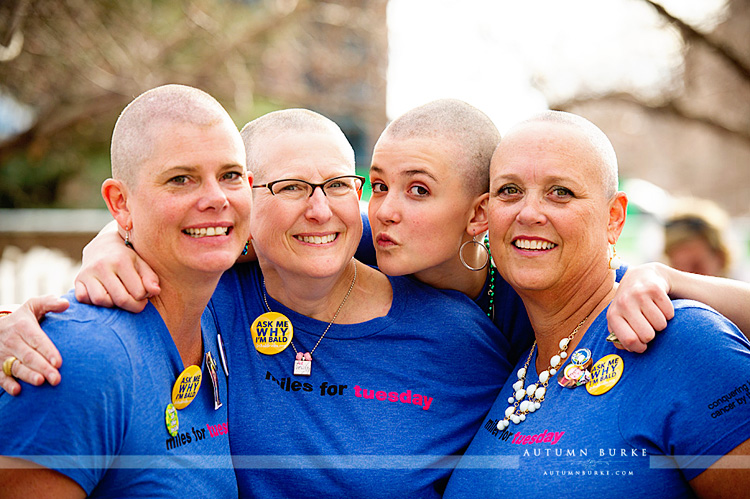 Named in GQ Magazine’s Top 10 Soccer Bars during the 2010 World Cup, the Seattle pub has always been a solid supporter’s bar for the Seattle Sounders FC  and its players. This year, showing a bit of thanks for all that love, Sounders players Dylan Remick and David Estrado stopped in and guest barbered on the big day! The goal of $30,000 was exceeded by a long shot this year!

Each shavee signs up for their own reasons and local firefighter and friend of the pub, Christopher Ross, sums it up best:  “I signed up five years ago after I met Joseph Sudo, a child battling cancer. After seeing Josephs strength I realized that I was going to be fighting for him. Unfortunately Joseph passed away. Although he was only 12 when he passed away two years ago, I know he was stronger than I could ever be. I will always miss Joseph and want to fight for the children in his memory.”

In a show of solidarity for kids undergoing chemotherapy, a group of staff members from Children’s Hospital of Atlanta volunteered, including neurosurgeon Dr. Barun Brahma, who was honored to be shaved by one of his former patients and cancer survivors, 16 year old Thomas Ritter! In total, the 1 team raised more than $65,000. 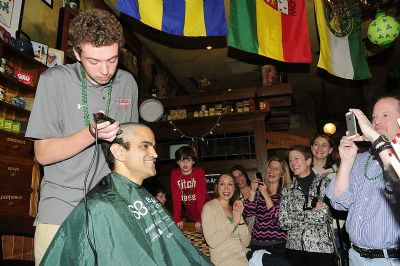 Lastly, I have my own story, which ironically happened at my local salon about a week after Paddy’s Day last year. I was getting my hair cut by a 20-something stylist with a shaved head.  I couldn’t help myself and told her she had a fabulous bald head. Well, that was all she needed to share how she just shaved it all off for charity at a local pub. She didn’t think that she raised much –“$1,200 something” — but she expressed how she had such an amazing day and a real sense of pride whenever people mentioned her baldness regardless.  I asked if she was going to keep it shaved since she really did pull off the Sinead O’Connor look quite well. She proclaimed, “heck no, I have to grow it out so I can participate in St Baldrick’s again next year!”

So, if you would like to learn more, sign up to be a shavee or just donate to the cause, please visit http://www.stbaldricks.org/campaigns/fado

Bald is beautiful! The countdown to St Patrick’s Day 2015 is on!